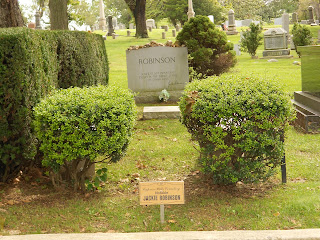 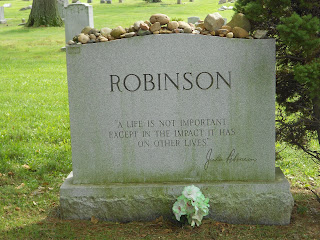 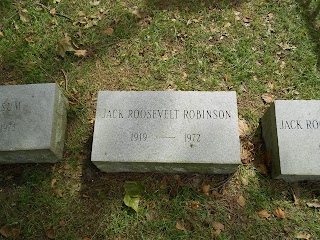 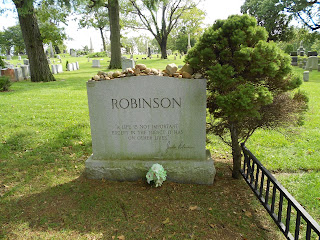 At the 1972 funeral of Jackie Robinson, 2,500 people packed Riverside Church in New York City. New York Governor Nelson Rockefeller, NY City Mayor John Lindsay, Baseball Commissioner Bowie Kuhn and NAACP Executive Director Roy Wilkins were just a few of the dignitaries to join family and friends in saying good-bye to the baseball legend. Rev. Jesse Jackson told the 2,500 strong throng that “The body corrodes and fades away, but the deeds live on.” Indeed, the legacy of Robinson, the first African-American to play in Major League Baseball, has never left us.


The Georgia-born Robinson was a member of the Negro League when he was recruited by Dodgers VP, Branch Rickey, to help integrate the game of baseball. After playing a few seasons for the Dodgers farm team, Robinson made history on April 15, 1947, when he played his first game for the Brooklyn Dodgers in Ebbets Field. That same year he was named the National League Rookie of the Year and, in 1949, he was its MVP. With Robinson on the team, the Dodgers won 6 pennants in 10 years. That’s not to say Robinson didn’t have to fight his way to the top, pushing back against racial attitudes of the times. Ultimately, he was accepted by fans and teammates alike with Pee Wee Reese being the first of Robinson’s teammates to publicly show support. In a telling incident --and a nod to Robinson’s playing skills -- Dodgers manager Leo Durocher once told the team that he “would sooner trade them that Robinson.” After playing his last game in 1957, Robinson’s #42 was retired and, in 1962, Robinson was inducted into the Baseball Hall of Fame.

Robinson -- who suffered from diabetes -- died from a heart attack at the age of 53 on October 24, 1972. A day after his death, Robinson lay in repose in the now defunct Duncan Brothers Funeral Home in Harlem, an establishment chosen so that the people Robinson inspired could more easily come to pay their respects. By the time the funeral home’s visitation began at 1:15 PM, 200 people were already waiting behind police barricades in a line which stretched around the corner. For hours, mourners filed past the silver-blue casket bedecked with a blanket of red roses. Late in the day, Robinson’s body was moved to Riverside Church for another day of public visitation.

You can read more about Robinson in The boys of Summer by Roger Kahn and Teammates by Peter Golenbock.
at September 27, 2011