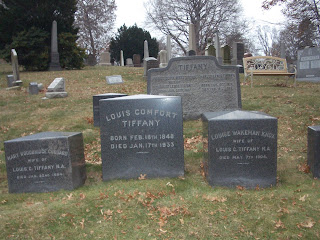 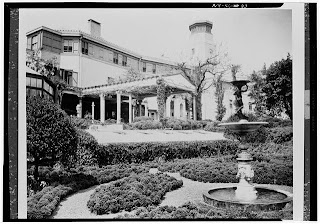 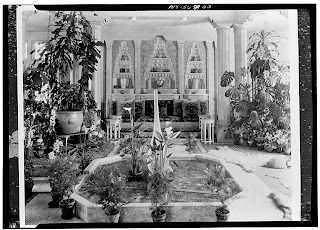 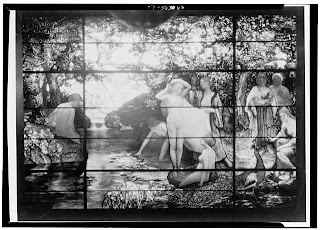 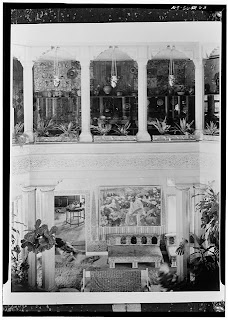 Yesterday, I attended a wonderful lecture about Louis Comfort Tiffany, at the Cold Spring Harbor Library in Long Island. Although I researched Louis Comfort, along with his father, Charles Lewis, the famed jeweler, I learned a number of things about the family and took a new look at their modest gravestones in Green-Wood Cemetery.

It seems that Louis C. Tiffany was quite the party animal, throwing lavish parties--sometimes for 1,000 people --at Laurelton Hall, his 100 room estate set on 580 acres in Oyster Bay, LI. The invitations were proffered by scrolls, often written in hieroglyphics, and guests were --more often than not --requested to attend in costume.

Louis Comfort Tiffany died in 1933, but Laurelton Hall lived on, serving as a haven for artists as per Tiffany’s wishes. Sadly, in 1957, the mansion burned down in a mysterious fire, the origin of which has never been discovered. Much of the contents of Tiffany’s home were destroyed. One of these, (which can be seen above) was Tiffany's prized work "The Bathers" created in 1914 to much controversy, and inadvertently smashed by firefighters trying to gain entrance.What could be salvaged can be seen in the Charles Hosmer Morse Museum of American Art in Winter Park, Fla. http://morsemuseum.org/on-exhibit/louis-comfort-tiffanys-laurelton-hall

Looking at photos of Laurelton Hall, one cannot help but wonder about the contrast between this magnificently whimsical property and the utilitarian monument that marks his grave. It is also interesting to note that Tiffany, who was married twice, is buried between both the wives he outlived.


The black and white photos above were taken by David Aronow (circa 1924) and are courtesy of the Library of Congress.
Email Post
Labels: Alexandra Mosca Cemetery Tour Famous Graves Gardens of Stone Green-Wood Cemetery Laurelton Hall Louis Comfort Tiffany Tiffany