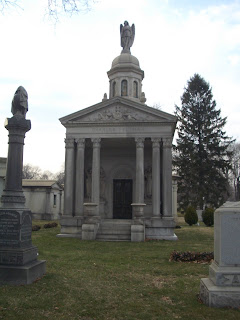 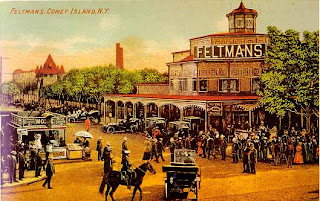 This majestic mausoleum houses the remains of Charles Feltman, credited with "inventing" the hot dog.

In 1871, Feltman opened the Feltman Restaurant and Beer Garden in Coney Island. His establishment proved hugely popular, and on one day alone, Feltman's was said to have served 40,000 hot dogs in just one day. Not only did Feltman know how to feed a hungry crowd, he also had an eye for picking staff, employing Jimmy Durante and Eddie Cantor as a pianist and singing waiter pair; two men who would go on to achieve their own celebrity. But the most famous alumni of Feltman's, hands down, was Nathan Handwerker, who worked as a roll-cutter and delivery boy. Handwerker went on to open a little hot dog place of his own in Coney Island: Nathan's.
at March 03, 2009