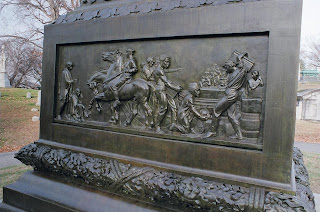 DeWitt Clinton was so many things to New York: Governor, Senator, Mayor and instrumental in the construction of the Erie Canal. Clinton also plays a large part in Green-Wood's history as it was Clinton's reburial in Green-Wood -he was originally buried in the Clinton Cemetery in New Britain, NY - that became Green-Wood's first major tourist attraction. This photo shows the exquisitely detailed bas-relief panel from Clinton's monument crafted by Henry Kirke Brown,
Email Post
Labels: Cemetery DeWitt Clinton Green-Wood Monument