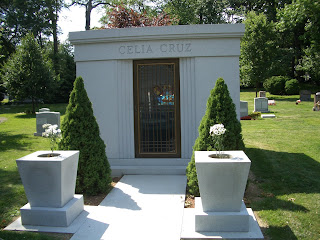 On July 22, 2003 -- a day that both NY’s Governor and NYC’s Mayor declared “Celia Cruz” day – the Queen of Salsa joined other music greats-- Duke Ellington, Miles Davis, Irving Berlin, George M. Cohan--in eternal slumber in Woodlawn Cemetery. Celia Cruz’s mausoleum in the venerable Bronx cemetery took a year to complete. It is open and airy with two-foot windows on either side, as it was Cruz’s wish that even in death she would be accessible to her multitude of fans. Visible on a shelf inside the structure are photos and mementoes of the joyous life she lived.
Email Post
Labels: Alexandra Mosca Bronx Celia Cruz Cemeteries Famous Graves Queen of Salsa Woodlawn Cemetery