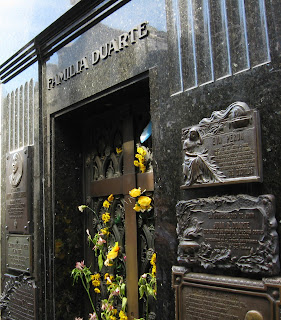 When Eva (nee Duarte) Peron, affectionately known as “Evita” to her adoring public, died at the age of 33 on July 26, 1952, her funeral was as grand as the life (albeit short) she had lived. Her body was medically embalmed --a rare and costly practice--and placed in a specially constructed Bronze casket with a glass cover for public viewing. And what a viewing it was! Eva’s body remained on display for 13 days during which time 3 million Argentines, after waiting in line for hours, filed past her casket to pay their final respects. In the meantime, construction was to begin on the mausoleum which would house her remains. However, it would take more than 20 years before that would happen. Ousted by a coup, President Juan Peron went into hiding as did Eva’s body, because of the strong anti-Peron sentiment in the country. On October 22, 1976, Eva Peron’s body was at last entombed in the family mausoleum in La Recoleta Cemetery. A plaque at the site is inscribed in Spanish with the words: Don’t Cry For Me. Located in Buenos Aires, La Recoleta is the final resting place of many of Argentina’s elite.
A friend who visited the cemetery graciously provided this photo. I’ve yet to get there, though I did write both a college paper and an article entitled The Death and Enduring Legacy of Eva Peron which appeared in the January 2001 edition of American Funeral Director Magazine.
Email Post
Labels: Alexandra Mosca Argentina Cemeteries Eva Peron Evita Peron Famous Graves Gardens of Stone La Recoleta