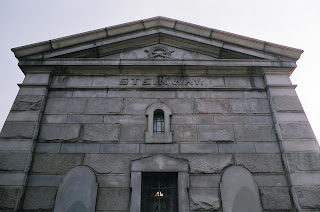 After emigrating from Germany along with his wife and four sons, Henry Steinway, born Steinweg, worked for piano makers in New York before starting his own company -–Steinway & Sons-- in 1853. Before long,  Steinway’s concert pianos became synonymous with quality and craftsmanship. A year before his 1871 death, Steinway purchased land in Astoria, Queens, relocating his business. The company remains in Queens to this day and a main thoroughfare –Steinway Street—is name in his honor. The Steinway family’s grand mausoleum, is the largest private mausoleum n Green-Wood Cemetery. Constructed shortly after Steinway's death, at a reported cost of $80,000, the granite structure has room for 128 entombments.