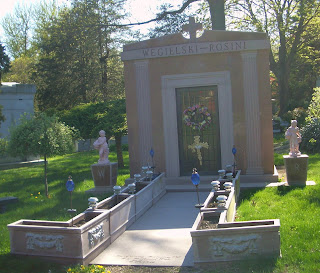 One of the most poignant love stories to be found in Woodlawn Cemetery is that of Lawrence and Elvira Wegielski. The New York Times apparently thought so too, judging by their 2003 feature NEW YORK LORE; Love, Unstoppable, which chronicles a devotion that transcends death.
http://www.nytimes.com/2003/02/09/nyregion/new-york-lore-love-unstoppable.html?src=pm
at April 30, 2011