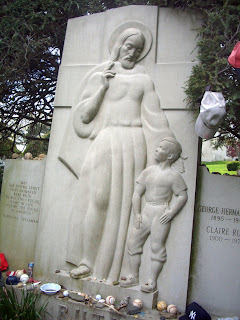 George Herman Ruth Jr. --known to the world as Babe Ruth--was one of the most iconic figures in the world of sports. From 1920-1935, Ruth was a major figure in baseball, leading the NY Yankees to 7 American League championships and 4 World Series titles. When Ruth died at the age of 53 on August 16th (my birthday) in 1948, his casket was placed in the rotunda of Yankee Stadium as befitting his stature. So beloved was he that over 100,000 people came to pay their respects. His grave at Gate of Heaven Cemetery in Hawthorne, NY is a treasure trove of Yankee memorabilia. It is also “the most recognized and visited [site] on the grounds,” I was told by the cemetery’s former superintendent, Jim Ford, who gave me a glorious tour of the cemetery for an article I was working on (and for which I was given special permission). In 2002, my profile of Gate of Heaven appeared in American Cemetery Magazine. It remains one of the few articles written about the cemetery’s noted denizens and I am grateful for the opportunity.
Email Post
Labels: Alexandra Mosca Babe Ruth Cemeteries Famous Graves Gardens of Stone Gate of Heaven Hawthorne NY