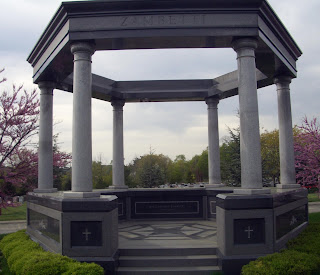 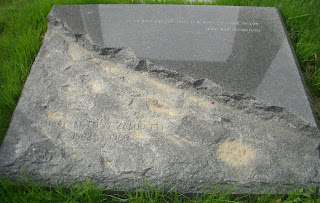 This open –air mausoleum --resembling a gazebo – was built for Marc Antony Zambetti, grandson of the Stella D’Oro Biscuit Company’s founder and son of its CEO. The granite and marble structure, faces away from a verdant road in Gate of Heaven Cemetery, opposite a stone bench. Embedded in the ground, in front of the bench, is a large granite plaque, symbolically bisected to signify a life cut short. Etched upon this plaque are the words: If He Who Has The Most Fun Wins The Game Of Life Marc Was Triumphant
Zambetti was one of the more than 60 casualties of a magnitude 7.1 earthquake which struck the San Francisco Bay Area on Oct 17, 1989, before the 3rd game of the World series at Candlestick Park. A sales director for his family’s business, he was killed when the Nimitz Freeway, on which he was driving home from work, collapsed.

Scholarships were created in Zambetti’s name at George Washington University, his alma mater, and the Riverdale Country School, from which he graduated high school in 1980.
at May 20, 2011