The Tomb of the Unknowns 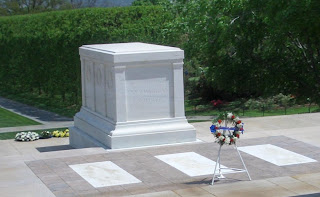 Arlington National Cemetery's Tomb of the Unknowns-- commonly called The Tomb of the Unknown Soldier --is perched high atop a hill, affording a spectacular view of Washington DC. Since the1921 burial of an unidentified WWI veteran, three more veterans --from WWI, and --have been entombed. The sarcophagus, in the shape of a tomb, is constructed of white marble and sports columns in the corners. The east panel, which faces , features three Greek figures which represent Peace, Victory and Valor.

The Tomb of the Unknowns is guarded around the clock every day of the year by Tomb Guard sentinels who are all volunteers from the elite 3rd U.S. Infantry. From the beginning of October to the end of March, the guard is changed each hour in an impressive ceremony. In the warmer weather --April through September --that changes occurs every half-hour.