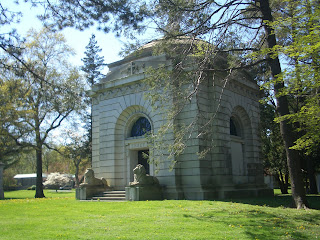 At the age of 22, George Ehret left Germany to join his father --a brewer --in New York. Within ten years --in 1866-- he established the Hell Gate Brewery, named for its location near Hell's Gate on the East River in Manhattan. For a good part of the late 19th Century, Hell Gate Brewery was the country’s largest brewer, rivaling Anheuser-Busch Pabst and Schlitz. Ehret chronicled his success in a book he published in 1891: Twenty-Five Years of Brewing with an Illustrated History of American Beer.


In addition to the brewery, Ehret amassed substantial real estate holdings in New York City, many of which were rental properties. As both a boss and landlord, Ehret was benevolent. Perhaps his kindness and philanthropic ways were part of the reason that more than 2000 people--–including the German Ambassador--attended his funeral mass at St. Patrick’s Cathedral in January of 1927, when he died at the age of 92. Ehret was entombed in the family mausoleum in Woodlawn Cemetery, joining his wife, Anna, who died in 1899. Constructed in the French Neo-Classical style, the Ehret mausoleum features two stately lions which guard the entranceway. The Lions were sculpted by John Massey Rhind, a noted Scottish sculptor, whose work includes the John Jacob Astor entrance doors at Trinity Church and the allegorical figures at Grant's Tomb, both in Manhattan. Rhind also produced the Apollo Fountain, a birthday gift for Mrs. Jay Gould, which is now part of Georgian Court University, formerly the Gould estate.

Little more than two years later, in March of 1929, Ehret’s son, George Jr. --who was running the company-- died suddenly, at the age of 53, following surgery in Manhattan’s Lenox Hill Hospital. Just two months before, the Ehret family had donated $700,000 to the hospital --of which George Jr. was a trustee --to endow a memorial building in honor of George Ehret Sr.

The funeral of George Ehret Jr. took place on Saturday, March 30, 1929. Because it fell during Holy Week, the Catholic service at St. Ignatius Loyola on Park Avenue, was brief. Still, it was well-attended, comprised of a mix of family, friends, employees, business associates and government officials, as well as a contingent of Ehret’s Columbia University classmates, the Lenox Hill Hospital Association and the National Democratic Club. The funeral procession to Woodlawn Cemetery was comprised of 50 vehicles and three flower cars transported the many floral tributes. Ehret’s nine million dollar estate, although susbstantial, was far less than the one left by his father, estimated at 50 million. Interestingly, a New York Times article published in November of 1930, quoted Ehret’s wife, now remarried, as saying that $130, 597 went for “funeral and other expenses.”

Ehret’s heirs continued to run the brewery until 1935, when they sold to Col. Jacob Ruppert --who once owned the NY Yankees --in April 1935. A few years later, the Ehret family bought a Brooklyn beverage company, later selling it to Schlitz. The family’s imposing mausoleum stands as an enduring symbol of a time when breweries afforded great riches.