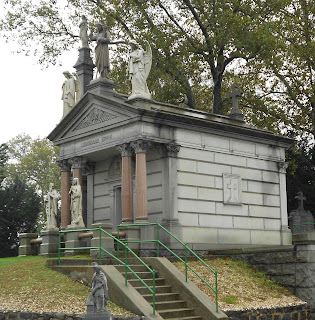 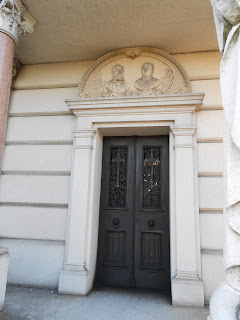 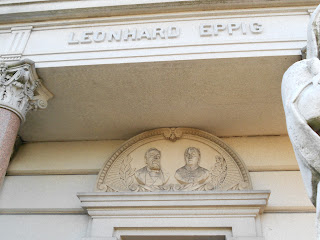 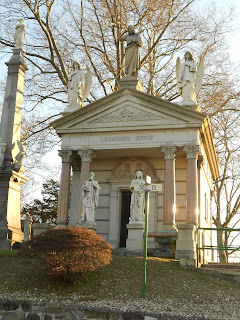 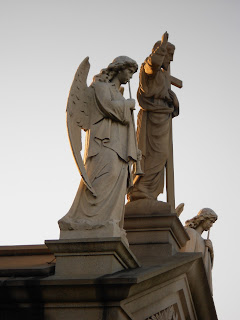 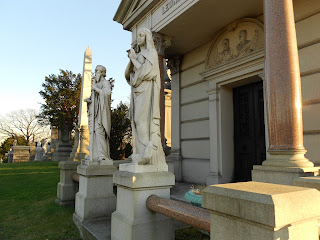 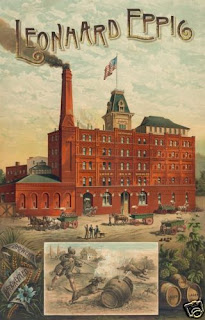 Leaving St. John Cemetery yesterday, after a funeral, I took a quick shot of this imposing mausoleum. The photo shows no indication of the rainy and gloomy day it was. I’d seen this mausoleum before and was decided to research the family name of Eppig. Turns out, Leonhard Eppig was a Brooklyn brewer who founded Leonhard Eppig's Germania Brewery in Bushwick, Brooklyn in 1866. He was also a major benefactor to the Catholic Church. In fact, because of this, two Brooklyn Churches --both of which served the German Catholic immigrants-- St. Barbara and St. Leonard, were said to be named for Eppig’s children. St. Leonard was founded in 1871 and, in 1884, Franz Leonard, its namesake, was married there. The church closed in 1978 and in 2001 the building was demolished. St. Barbara, built in 1910, was designed by the architectural firm of Helme and Huberty, the firm also responsible for the Central Park boathouse and the Greenpoint Savings Bank, and still serves the community today.
According to the Brooklyn Eagle, a foot injury Eppig sustained "...while bathing at Rockaway" resulted in blood poisoning and necrosis, contributing to his eventual death. When Eppig died, in 1893, his estate was valued at $375,000 out of which $3,000 was left to St. Leonard’s and $2,000 to Little Sisters of the poor. His son, Franz Leonard, ran the company until Prohibition began in 1920 and brewery operations were halted. When Prohibition ended, the plant was acquired by the Ehret family --featured in a previous blog post --who ran the Hell Gate Brewery, once regarded as the largest brewery in the US. Then, in 1949, the former Germania Brewery was purchased by the Schlitz Co., which operated the brewery until 1973.
at October 20, 2011