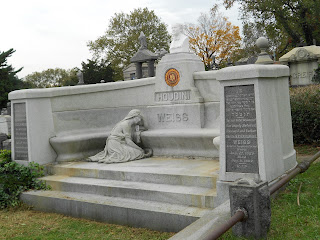 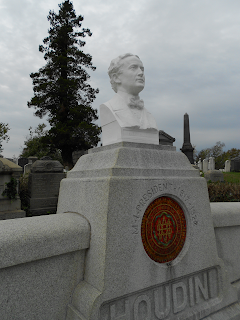 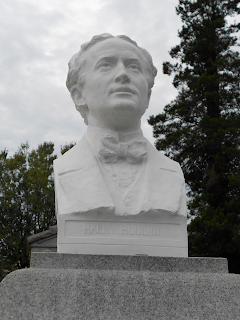 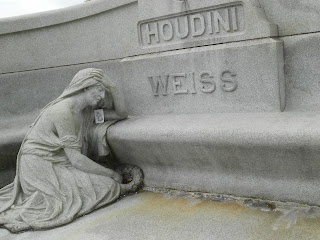 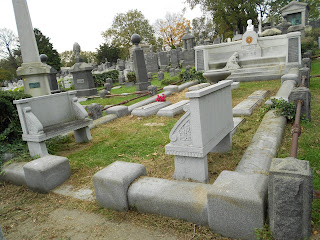 I’ve posted about Harry Houdini (aka Ehrich Weiss) before, but with a new development –-and new photographs--here’s another tribute to the famed magician on the 85th anniversary of his death.
On October 31, 1926, Harry Houdini died in a Detroit hospital from peritonitis, following two surgeries for a burst appendix. He was 52 years old. Houdini’s body was placed in a bronze casket the magician had had specially constructed  for one of his acts and –-it was said --for his eventual burial. Curiously, after Houdini’s last show in Detroit close, his equipment was all shipped back East except for the casket. On November 3rd, Mrs. Beatrice Houdini and three of the magician’s siblings accompanied his body on the train to NYC. There it was met at Grand Central Station by a large group of friends and relatives before being taken to the West End Funeral Chapel.

At 10:30 AM, the next morning, Houdini’s religious service took place at the Elks Club in Manhattan. Two Rabbi’s officiated and Lee Shubert and Bernard Gimbel (prominent men of the times) were among the honorary pallbearers. Following the service, burial took place in the Weiss family plot at Machpelah Cemetery --which takes its name from the burial cave of Abraham --in Queens, NY. It was Houdini’s wish that he be buried at the right side of his mother and that her letters to him be placed in his casket. He also made a pact with his wife that he would try to communicate with her from the spirit world. Thus, Houdini’s widow held a séance on each anniversary of her husband’s death until 1936, when she grew disillusioned. That last séance was held on the roof of a Hollywood hotel and attended by more than 200 people and members of the press. A few years before her death, she stated in her will that, “I do not now nor did I at any time belive in spirit messages.” Mrs. Houdini -–a Catholic--died in 1943 and despite her name appearing, along with Houdini’s, at the family’s grave site, she was not permitted to buried with her husband. Instead, she is buried in Gate of Heaven Cemetery in Hawthorne, New York.


For 68 years after Houdini’s death, members of the Society of American Magicians would join thousands of Houdini fans at his grave, on October 31st, for a ceremony. This tradition ended in 1994 after a number of acts of vandalism, which included the theft of several busts of the famed magician. Recently, in a space that has been empty for 20 years, the bust has been replace yet again. But the cemetery remains closed until after Halloween.