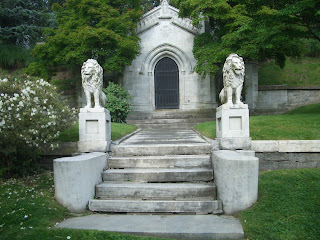 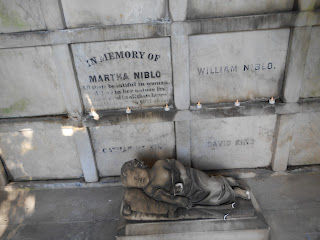 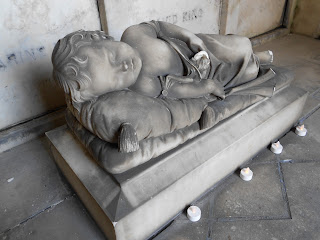 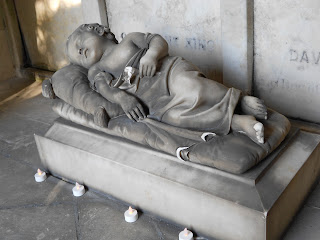 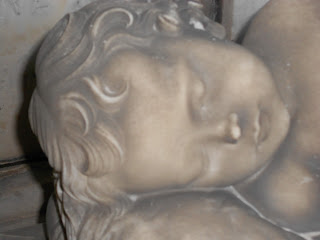 William Niblo was a well-known 19th Century impresario and the proprietor of Niblo’s Garden, a vast entertainment complex. Located in lower Manhattan, Niblo’s Garden boasted a 3,000 seat theatre, restaurant, saloon, hotel, and an outdoor garden. In 1866, a production called The Black Crook debuted and, in time, this long running show came to be viewed by historians as Broadway’s first musical.
When not overseeing theatrical productions by some of the era’s most popular performers, Niblo could often be found tending the garden in front of his mausoleum at Green-Wood Cemetery, where he would also sometimes picnic with friends. This Gothic Revival mausoleum was built for Niblo’s wife Martha, who died in 1851, and overlooks Crescent Water. Niblo once stocked the pond with goldfish which migrated to Green-Wood’s other six (at the time) ponds through their interconnections.

Niblo died in 1878, at the age of 89, and in his will allotted $5,000 to the Green-Wood trustees for the upkeep of his mausoleum. The last performance at Niblo's Garden was on March 23, 1895; the property was then purchased and razed by “Sugar King” Henry Havemeyer --also buried in Green-Wood—for a new office building.

Recently, during openhousenewyork(sic) weekend, Green-Wood opened the doors of this historic mausoleum to the public. A rare glimpse inside afforded the opportunity to view the poignant statue of a child. The significance of the small statue is unclear. Does it represent one of Niblo’s children? If anyone has additional information, I hope you will share it with readers of this blog.
Email Post
Labels: Alexandra Mosca Cemeteries Cemetery Cemetery Tour Famous Graves Gardens of Stone Green-Wood Cemetery Niblo's Garden William Niblo