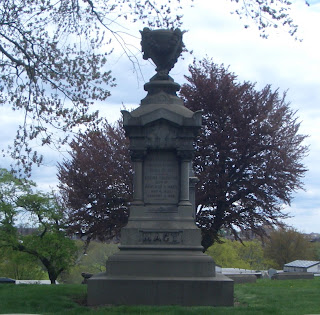 In honor of Macy’s Thanksgiving Day parade, Rowland H. Macy is today’s subject. Born to a Quaker family in New England, Macy found success --and made retail history-- with R.H. Macy & Co., which opened in 1858 in lower Manhattan. First day sales amounted to $11.06.
Macy died in Paris, in 1877, just weeks after traveling to Europe with his family on the advice of his doctors to get some R &R. A New York Times article announcing his death read that: “Laborious work during his best years, brought him, at the age of 56, to a sick bed, suffering of Bright’s disease of the kidneys, of which he died.” However, his funeral did not take place until June 29th. After a religious service in New York City’s Church of the Holy Trinity, attended by family, friends and 300 Macy employees, Macy’s body was taken by special train to the Bronx, for burial in Woodlawn Cemetery . In his will, Macy left the bulk of his estate to his wife and daughter, excluding his son, Rowland Jr., save for an annual annuity of $1,000. In his will, Macy stated that “….I cannot trust him with the care or management of my property . …though he is now 29 years of age, he has been entirely supported and maintained by me.” In 1893, R. H. Macy & Co. was acquired by the Straus family, owners of Abraham & Straus. The Straus family is also buried in Woodlawn Cemetery.

In 1902, Macy’s flagship store moved to Herald Square at 34th Street and Broadway, where it remains today. An addition to the property, in 1924, made Macy’s Herald Square the largest store in the world. This was also the first year of what became an annual event, the Macy's Thanksgiving Day Parade. An estimated 10,000 people turned out to watch.
It is interesting to note that in 1939, retailers lobbied President Franklin Roosevelt to change the Thanksgiving holiday from the last Thursday of November to the fourth Thursday, in order to extend the Christmas shopping season. Despite opposition from other businesses, Congress passed such a bill, which President Roosevelt signed into law in 1941.
Email Post
Labels: Alexandra Mosca Bronx Cemeteries Cemetery Tour Famous Cemeteries Famous Graves Gardens of Stone Macy's R.H. Macy Woodlawn Cemetery