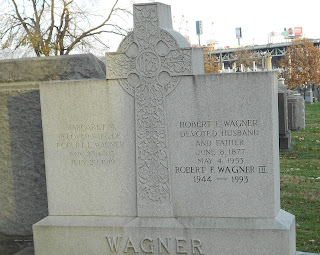 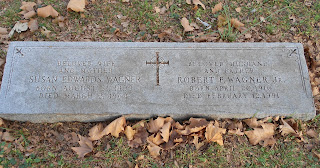 The Wagner name was well-known in New York politics. Three generations of Wagner men –-all named Robert Ferdinand--served the state and city. Robert F. Wagner, Sr., the family patriarch, served as U.S. Senator from 1927 to 1949. He died in 1953. Wagner’s son, Robert F. Wagner, Jr., was New York City’s 102nd mayor and one of the city’s most popular. Elected to three terms –his tenure was from 1954 to 1965---as mayor, the Yale graduate previously served as Manhattan’s Borough President before winning the mayoral race at the age of 43.
Wagner died at the age of 80, on February 12, 1991, from bladder cancer. His funeral took place four days later. At St. Patrick’s Cathedral, 700 mourners, including Governor Mario Cuomo, Mayor David Dinkins and former Mayors Lindsay and Koch listened to a sermon by Cardinal O’ Connor. Opera singer, Robert Merrill, serenaded the congregation with his rendition of Ave Maria and Wagner’s son, Robert F. Wagner III, gave a eulogy. In it, he shared with the audience some advice his father had left behind: “When in danger, ponder. When in trouble, delegate. And when in doubt, mumble.” When the religious service ended, Wagner’s Mahogany casket was shouldered out of the cathedral by police pallbearers and placed into the hearse for the ride to Calvary Cemetery in Woodside, Queens. There, on a bleak winter day, Mayor Robert F. Wagner was buried in the family plot with his parents and first wife, Susan who preceded him in death in 1954.

Two years later, former Deputy-Mayor, Robert F. Wagner III died suddenly, at the age of 49, from an apparent heat attack. He, too, is buried in the Wagner family burial plot.