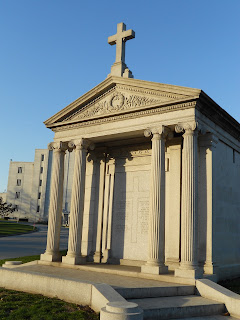 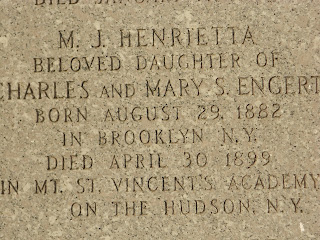 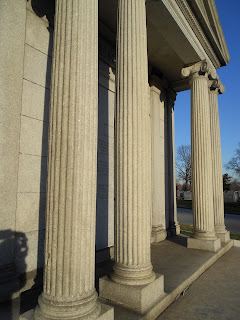 When I’m in a cemetery --be it for work or leisure --a monument or mausoleum will catch my eye and I’ll want to learn more about the story behind the family name. Such was the case with the Charles Engert mausoleum in St. John Cemetery. I’ve seen this mausoleum numerous times as it is prominently located across the road from Charles Lucania, and on the way to the Cloister. This week, I stopped to really look. From the look of the structure I felt fairly certain that the family was prominent and one of means. These assumptions were borne out, along with the tragedy which prompted the construction of this mausoleum. Here’s what I learned:

Charles Engert was a Brooklyn-born builder and realtor. Prosperous and well-known, he was a founding member of the Hanover Club. In April of 1899, his only child,16 year old daughter M.J. Henrietta (known as Hattie) died at her school-- Mt. St. Vincent Academy on the Hudson --from spinal meningitis. Hattie had recently returned to school after Easter recess. During that time, the Engerts made plans to take their daughter abroad over the summer. On the day of her funeral, family and friends came to pay their respects at the Engert’s Bedford Ave. home before Hattie’s Funeral Mass was at the Church of the Transfiguration on Marcy Ave. in Brooklyn. Following the religious service, the girl’s body was placed in a receiving vault at St. John Cemetery in Middle Village, Queens while the family mausoleum was being built. Hattie’s tragic death came only four years after her first communion, a grand affair replete with an orchestra and a big name caterer, which--–because of the family’s prominence--invited newspaper coverage. In June of 1895 the Brooklyn Eagle noted that “The dining room was made lighter than day by a framework of incandescent lights and the temperature was materially lowered by the presence of several electric fans.”

Charles Engert. died on March 17 in Bad Nauheim, Germany, leaving an estimated fortune in excess of 700,000. The bulk of his estate went to his widow, Mary, with other monies left to various Catholic charities and educational concerns. The largest bequest was left to the city of Volksen, Germany, to establish a free kindergarten in the name of his father, Kaspar, who died in 1877. In addition, $2,000 was left to the St. John Cemetery Corp. for the perpetual are of the family mausoleum.
Email Post
Labels: Alexandra Mosca Cemeteries Cemetery Cemetery Tour Charles Engert Famous Cemeteries Famous Graves Gardens of Stone Hattie Engert St. John Cemetery