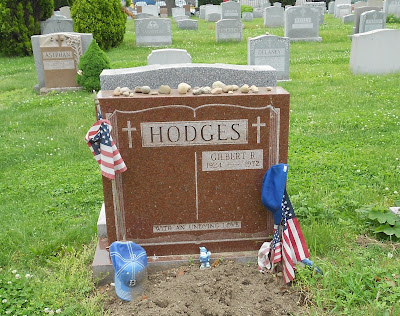 Buried in Brooklyn's Holy Cross Cemetery, visitors often leave baseball memorabilia at the grave of the beloved former first baseman, and New York Mets manager. Hodges suffered a fatal heart attack, in 1972, after playing a round of golf in Florida. On what would have been his 48th birthday, over a 1,000 people waited on line outside a Brooklyn funeral home hoping to be admitted to pay their respects.

On the day of Hodges’ funeral fans stood behind police barricades for a glimpse of Hodges’ casket as it was being brought into church. Baseball luminaries --among them Baseball Commissioner Bowie Kuhn, players Pee Wee Reese, Jackie Robinson, pitchers Tom Seaver, Sandy Koufax, and sports announcer Howard Cosell --filled the pews.


Brooklyn Bishop Francis J. Mugavero was the principal celebrant, while Hodges' pastor and friend, Father Charles E. Curley, gave the homily. ”Gil was a hero. All of us need heroes, though lately they seem to be in short supply. Here is one to look up to and imitate,” he told the congregation.
at May 22, 2013 No comments:

Finally got the chance to tour two of Washington DC's standout cemeteries: Oak Hill and Congressional. So many monuments caught my att...

Alexandra Kathryn Mosca
I am the author of Gardens of Stone: The Cemeteries of New York from Colonial Times to the Present. (Fonthill, 2016) Green-Wood Cemetery (Arcadia Publishing, 2008) and Grave Undertakings (New Horizon Press, 2003). For 20 years I have been a regular contributor to American Cemetery & American Funeral Director Magazines. In that time, I have profiled a number of noted cemeteries, including Green-Wood, Calvary, Oakland, Gate of Heaven, Salem Fields, Ferncliff, Kensico and Moravian. My interest in cemeteries began as an offshoot of my career as a funeral director. Having spent time in many cemeteries in my capacity as a funeral director, made me see that graveyards are so much more than a place to bury the dead. They are also repositories of history, set on bucolic grounds, where one can admire diverse architectural styles while reflecting upon the intersection of life and death.